In honor of Labor Day, I’m going to write this blog.

Growing up, this was always the weekend my dad would get motivated to clean the garage. It was a family affair with the Jerry Lewis Telethon on in the corner.  Once a year everything came out of the garage.  We would sweep up the mouse droppings and decide what was going back in and what was going in the trash.

So here it is, the annual Bunker Fuzz garage cleaning. If only we had a garage door on the bunker, we could let the late summer air roll in. This past week I sold the first amp I ever bought.  It was a little Marshall practice amp that I haven’t touched in years.  I also sold a couple guitar pedals.  Hey, It’s that time of year.  Theo stopped by the Bunker this week and brought some of the final shelves for the complete ReBunkering.  Together we cleared everything out from under the riser.  We decided what would stay and what would go.  It was the same process I grew up with.  As we clean out the Bunker, let me know if you have any suggestions to tidy up this blog.  I always appreciate hearing that you’re reading.  As always, much love to all the people who make the Bunker happen and to everyone who supports King Fish Crow.  It means the world to us.

We just confirmed two shows in October. Loon Fest is on October 7th and it starts in the afternoon and goes all night.  So come out and support the BWCA with us and some really cool people that we like a lot.  We will also be playing October 19th at the Viking Bar with The Mumbling Owls.  We’ve been trying to book a show with them for a while now.  We had a house party lined up back in December but a snowstorm had other plans.  Finally we will share the stage with these cats (birds?).

In September and Coming up quick, we have a show on the 20th at the Pourhouse with Scubadiver.  It’s going to be a total thing with all of the main stuff and the sides.  Scubadiver is getting ready to kick off a Midwest tour and they are traveling up from Houston.  By the looks of their facebook page, they are unfazed by Harvey and in good spirits spreading cheer like only they can.  All systems go for their Where Am I!? Tour. 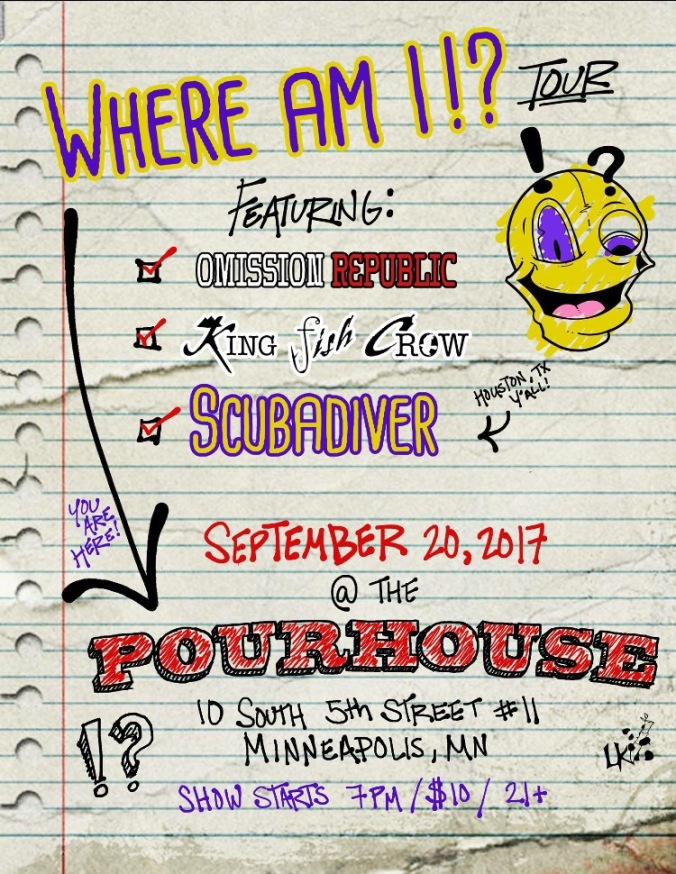 Two days later, September 22nd, we are playing with our amigos Loons in the Attic at the Nomad World Pub.  Music starts at 10pm.  We’re on at midnight.  See you when the clock strikes. 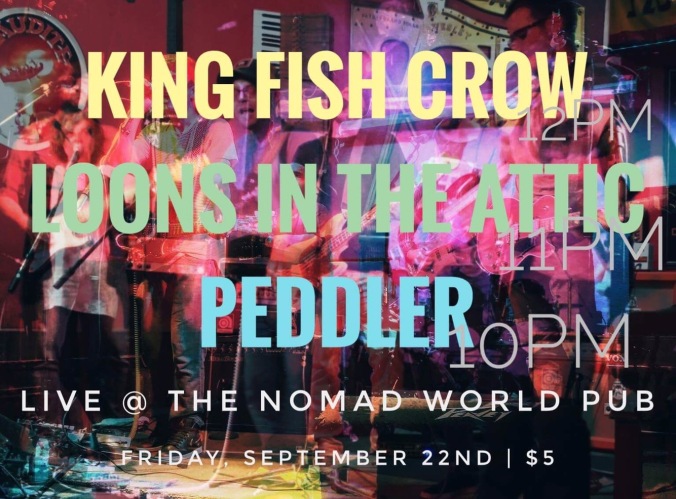 “The objective of cleaning is not just to clean, but to find happiness living within that environment.”     – Marie Kondo