We had an event filled day on Saturday. A first year benefit ice fishing tournament and a show in the attic of the Auk’s Roost.

This past Saturday morning, Dave and I went out to Bald Eagle Lake and attended the first annual Austin Strong Ice Fishing Tournament to Freeze-Out Childhood Cancer. The Austin Strong Foundation is a non-profit organization that exists to raise awareness, fund research and support those families affected by childhood cancer.  It was created in memory of the super strong, super loved Austin Smith of Monticello, Iowa who at only five years old was diagnosed with a rare, terminal form of brain cancer.  The foundation continues a fight for Austin and all childhood cancer warriors!  The foundation is close to our hearts.  And the Minneapolis chapter is run by Dave’s mom and sister.  It was great to get out on the ice and support the cause.  The treatment was five star with goodie bags (that included hand and foot warmers), hot cocoa and coffee, and sloppy joe’s for lunch.  I wasn’t sure what to expect.  There were awards for largest and smallest fish.  I’ve only ice fished once or twice.  I’d have to put quotes around the fishing part and I’ve never been a part of a fishing tournament of any kind. I was missing out.  There were a lot of people there and they were all dressed for the weather and having a great time, some of them driving their trucks out onto the eighteen inches of ice.  The warming shelter gave a welcome opportunity to get out of the brisk wind.  To see the ice glow underneath you in a dark shelter is kind of a neat experience.  I didn’t catch a thing and Dave didn’t either, but that was definitely not the point.  It would have been a perk for sure, could have been a perch.  But alas, it was an honor to be a part of the inaugural event and we wish them many years of success with the tournament.

Later that night, we met up at the Bunker and Dave, Corey, Shane and I caravanned over to the Auk’s Roost and carried our minimal gear up two tricky stair cases and loaded into the Attic. Shortly after our noisy ascent, the evening began with Rob the Bagman’s performance.  He sat on a stool in front of the unlit fireplace and delivered a rambling, melodic folk vocal reminiscent of another Minnesotan Robert.  He seemed to gain confidence as he sang his songs, as if the lyrics stirred some deep emotion.  When he finished he packed up and left, Liz arrived and Fletcher Magellan began setting up in a circle around the outside of the room while the people gathered cozily in the middle of the floor.  They dished out a fantastic set, with Cody in one corner singing, playing acoustic guitar and thuddin’ the suitcase kick drum.  They played old tunes and new tunes, including a new song of theirs that I can’t get out of my head.  Their musicianship is top notch and the songwriting is arguably the best in town.  Everyone was into the groove.  Libations were flowing.  And when Fletcher Magellan wrapped up, it was time for some King Fish Crow.  Beau showed up just in time.  It was the first time all six of us had played the Auk’s Roost together.  We settled in front of the fire place.  Corey sat on a chair with his keyboard on his lap.  Dave stood in front of Corey with his acoustic plugged into a seven inch orange amp.  Shane stood just to the right of Corey and Dave with his bass plugged into a small amp.  Liz sat on a stool to the right of Shane.  I was just to her left sitting on a cajon facing the room.  Beau was directly in front of me, facing me, his back to the people gathered.  He was playing a pizza box snare drum with brushes, a ride, and a suitcase kick drum.   We thought we’d play nine songs, maybe ten and we played eleven.  It’s not every day we pull the microphones away and play an acoustic set, but there’s something special about the Auk’s Roost.  And it was Saturday night.  We played some of our favorite songs off Hotdish Army and we pulled out some new tunes that are shaping up for our next recording session.  Everyone there was fantastic and sang along at the end of Hush.  And maybe we played it a little longer than we usually do, but it was working and it was, without a doubt, the highlight of my night.  After we wrapped up, the Sawed-Off String Band took to the space in front of the fireplace and rallied off some foot stomping goodness into the far corners of the attic.  If you like raw bluegrass and songs about whisky, this is the band for you.  Their banjo player may have been the show stealer for the night.  And even down a violinist, they didn’t miss a beat.  It was a more than fitting end to an acoustic and up close night of local Minnesota folk, rock and country. 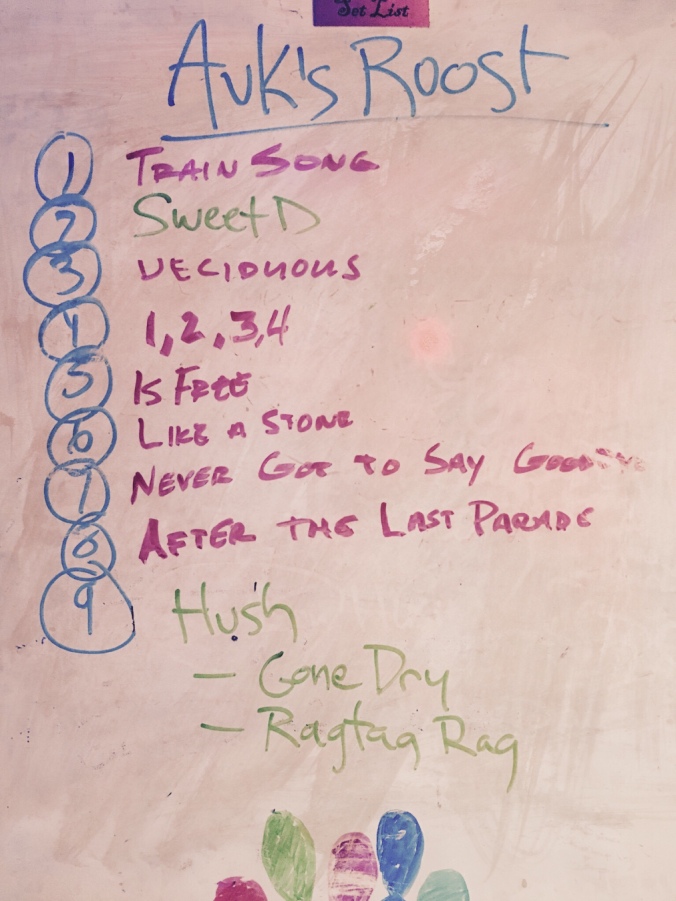 “The real interesting stuff is in the cellar and the attic.”     – Sherman Alexie

One thought on “Busy Saturday”