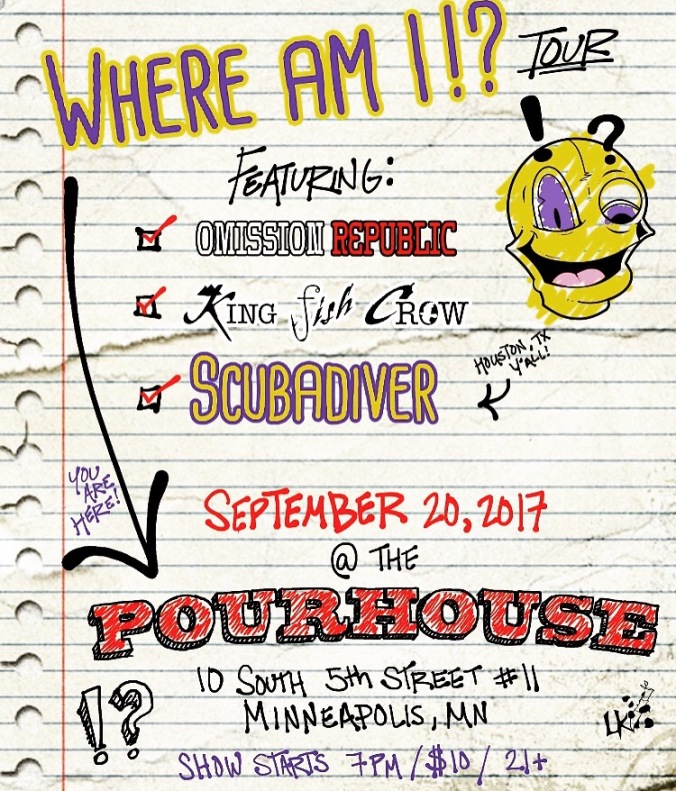 Call your friends. It’s the week we’ve been waiting for.  This Wednesday, September 20th, we’ll be at the Pourhouse with Scubadiver and Omission Republic.  The guys in Scubadiver are on the road and playing cities on their way to Minneapolis.  So come on out to the Pourhouse and see what they have up their sleeves.  Remember this is an early show that starts at 7 pm.

This past week I wrote 25 “Interview” questions and emailed them to the band. I’m not sure if there is any true journalism involved here, but I hope that it lets you in on the crew who make up King Fish Crow.  Each week (or so) I’ll introduce you to a new member of the band and give you a little peak into what makes them tick.  This week, and to lead off, (because it’s his Birthday week) is David Brown.  Happy Birthday, Dave!

When did you start playing an instrument?

In the summer before 5th grade, I started my first instrument, the trombone.  I picked up the bass around 16-17 years old because my friends wanted to start a band (Waving White).  Shortly thereafter, I volunteered to learn guitar because we couldn’t find a guitarist.

Who are your favorite bands/musicians/artists?

Who are your biggest musical influences?

Mr. Starry/Mr. French (HS Music Teachers), my dad (he got me on my feet playing guitar), David Gilmore, Prince

Who are your favorite local bands?

What is your favorite piece of gear? Why?

My custom Gibson 356. It was a gift to myself after surviving the 35W bridge collapse.

What genre is King Fish Crow?

How cool is the Bunker?

It’s the best…though I’m not sure it could live up to its namesake if need be…unless of course, you’re trying to shelter yourself from cool, refreshing air.

What has been the most memorable King Fish Crow show for you?

One of the Lily Springs shows…lots of memories, and the most recent was special because Drew was able to rejoin us on stage. I’ve always cherished performing with my bro.  Or the show where we opened for Twilight Hours…getting to play a show with some of the musicians I looked up to as a kid was pretty cool.

What is your favorite King Fish Crow song to play live?

Hmm, that’s kind of a moving target…but, at the moment, I’d say either Ragtag or Is Free.

What is your favorite color?

What city do you live in?

What is your hometown?

What do you do during the day?

What is your favorite movie?

What is your favorite Holiday?

What would you bring for your “Desert Island Playlist”? (5 Albums)

OK Computer, Dark Side of the Moon, Illmatic, 1999, can’t decide which Led Zeppelin album to include…I think I’d go crazy if I could only pick 5 albums…never could truly answer this question.

What is your favorite hobby/pastime?

Do you have pets?

What is your favorite beer?

What is your preferred method of travel?

What is the most important think to know about you?

I live by “The Golden Rule” and believe nothing is more important than doing what brings you happiness. If you can do that, you will be the best version of you.

What is your biggest pet peeve?

Playing live or recording in a studio? Which do you prefer?

Both are great, but I prefer a live show…can’t recreate the adrenaline.

If King Fish Crow booked a show on the moon that was to be broadcast to earth and the entire galaxy, would you make the proper preparations and ultimate voyage?

“Music is a moral law. It gives soul to the universe, wings to the mind, flight to the imagination, and charm and gaiety to life and to everything.”     – Plato